It’s always refreshing to see a celebrity doing things for the good of the planet because they really believe in it, rather than just trying to get on a free publicity band-wagon.

Here is an interesting article I found in The Hollywood Reporter, there is a link to the full article at the bottom of the post. 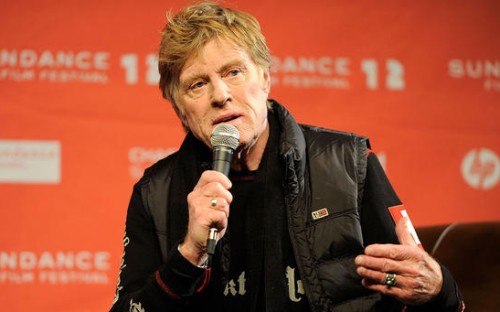 The actor tells The Hollywood Reporter he’s optimistic that the president will “take what his words were and put some teeth behind them.”

Longtime conservationist Robert Redford is relieved that President Obama won re-election but has tempered optimism about what the government can do to address environmental issues and climate change — especially in the wake of the havoc caused in the Northeast by Super-storm Sandy.

“He’s lightly touched on this as an issue, that it’s unfortunate that it took a storm of such consequence to draw the attention that could’ve been drawn by the candidates on the campaign trail,” the actor explained to The Hollywood Reporter. “Now I’m hopeful that (Obama) is going to take what his words were and put some teeth behind them.”

Redford spoke to THR after a press conference unveiling a Pitzer College conservancy that bears his name. The actor, a trustee at the school, recently wrote that “fierce partisanship” about climate change might be “thawing” in Washington D.C. But that doesn’t mean he’s holding out too much hope for an emerging legislative consensus on the issue.

“So I guess I put my hope more in the people, not so much in current government.”

The grassroots sentiment dovetails nicely with the newly unveiled plans for the conservancy, named the Robert Redford Conservancy for Southern California Sustainability.

Redford has long been involved in environmental causes. He’s the chair of the Redford Center, located in Sundance, Utah, which advocates for sustainable initiatives.

Full story at… The Hollywood Reporter

I hope you have found this article –Robert Redford Environmentalist – informative, and you will share your own experiences below in the comment box and please take the time to click on the share button, many thanks; see more articles on The Daily Green Post home page.

Robert Redford – Environmentalist, were you aware of his off screen pursuits?