Biofuel Navy for the USA, surely a step in the right direction 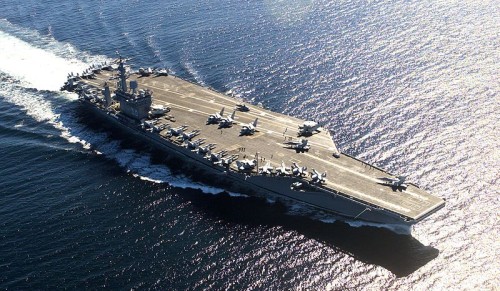 Surely the US should be applauded in making huge strides forward in the fight for renewable energy.

Obviously the costs involved are on a massive scale, but we all know that prices rapidly decline as more and more people in more and more countries become actively involved.

Everything has to have a beginning, so let’s encourage the development of these new greener forms of fuels. A biofuel Navy is a good start.

The Navy conducted ‘Great Green Fleet’ test exercises on July 18th in waters near Hawaii as part of the Rim of the Pacific event, the world’s largest international maritime exercise.

During the test, an aircraft carrier, jets and vessels were powered by a blend of petroleum-based fuel and advanced biofuels derived from algae and cooking oil.

As the Navy concluded test exercises with biofuel-powered planes and vessels near Hawaii Thursday, top Obama administration officials hit back against criticism that the endeavor was a waste of taxpayer dollars.

Navy Secretary Ray Mabus said the “Great Green Fleet” test exercises for the first time proved that aircraft carriers, FA-18 jets and other equipment could run on advanced biofuels without any modifications — a major milestone in his quest to find an alternative to fuels derived from foreign oil. 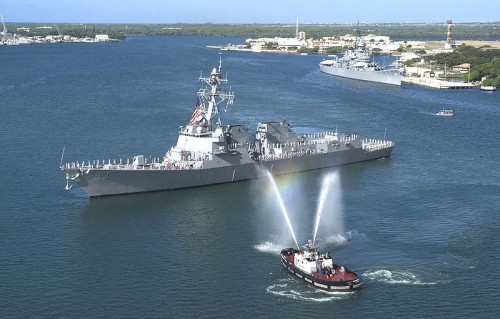 The initiative proved “we can increase our combat capability” and “we can do it with absolutely no change in the equipment we have today,” Mabus said in a conference call with reporters.

“It was worthwhile to show that biofuels can compete and can be used in every single thing that we do in the Navy,” Mabus added. “Everything before now has been a test. This shows that we can use biofuels and other alternative energies in an operational manner.”

Critics have blasted the planned exercises as too costly, especially as the Defense Department heads toward congressionally mandated budget cuts. In preparation for the carrier strike test, the Navy spent $12 million buying 450,000 gallons of alternative fuels, which works out to just under $27 per gallon. Once blended 50-50 with petroleum, the final cost settled around $15 per gallon.

During the test exercises Wednesday, foreign military leaders and top Pentagon brass looked on as helicopters and other aircraft running on advanced biofuels landed on and lifted off from the U.S.S. Nimitz aircraft carrier. Electronic attack aircraft were refueled with the advanced biofuels in air, and a separate refueling took place at sea.

The advanced biofuels used to power the Navy vessels came from a mix of algae and cooking oil, sold by San Francisco-based Solazyme and Louisiana-based Dynamic Fuels, a joint venture of Tyson Foods and Syntroleum Corp.

Mabus also signed a statement of cooperation with the Royal Australian Navy to guide future collaboration on using biofuels for military operations, which he described as essential to blunting the costs of price spikes and supply fluctuations in foreign oil.

“The Navy is committed to pursuing alternatives to foreign oil and the whole Navy believes it is critical to our combat capability and to our national security,” Mabus said. “Our reliance on foreign oil is a very significant and very well recognized military vulnerability, and we are trying to address that vulnerability.”

“We cannot keep what we’ve done in the past,” she said. “We can’t be timid about embracing new forms of energy like biofuels.”

The Navy, Agriculture Department and Energy Department recently announced $30 million in federal funding to support the commercialization of biofuel substitutes for diesel and jet fuel that can simply be dropped into existing tanks and infrastructure. The Energy Department also is spending $32 million to support research into advanced biofuel technologies at earlier stages of development.

Let’s hope Countries worldwide will all get involved in the struggle to find greener energy sources.

When we all collectively as a global community become involved, it’s quite amazing what we can achieve.

A biofuel navy could just be the beginning we are looking for: if you have any comments please leave them below, many thanks for taking the time to read this post.