The U.S.A. has placed Polar Bears on the Endangered Species List

America, after weeks of delays have finally got their act together and put Polar Bears on the endangered species list. 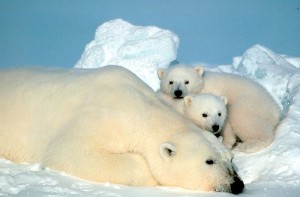 After delaying a decision for several weeks, the U.S. government today listed the polar bear as threatened under the Endangered Species Act (ESA), creating new protections for the bears in their Alaskan habitat.

But officials emphasized that the decision will not be used to determine U.S. climate policy.

At today’s announcement, Secretary of the Interior Dirk Kempthorne noted the dramatic decline of Arctic sea ice as the greatest threat to the bears.

Polar bears live in the Arctic and hunt seals and other fatty marine mammals from sea ice.

They also travel, mate, and sometimes give birth on the ice.

But sea ice is melting as the planet warms, and it is predicted to continue to do so for several more decades.

“Because polar bears are vulnerable to this loss of habitat, they are—in my judgement—likely to become endangered in the foreseeable future,” Kempthorne said during a press briefing.

Because the U.S. classifies the polar bear as a marine mammal, the rule means that the bear’s new threatened status will not impact oil exploration within its habitat.

Subsistence harvesting of polar bears and interstate trade in native handicrafts made from the animals will also be allowed to continue.

However, the listing means that import of polar bear products from Canada—where trophy hunting is still legal—will now be banned.

More at: Polar Bears Listed as Threatened Species in U.S

There were mixed reactions globally; most agreeing that it was a step in the right direction but that there was a long way still to go.

The key to success is generally seen as needing more International Cooperation on the endangered species lists.

I hope you have found this article – Endangered Species – informative, and you will share your own experiences below in the comment box and please take the time to click on the share button, many thanks; see more articles on The Daily Green Post home page.