Is it time to start worrying about Global Warming yet?

If not now, when?

Take a  look at the information below, it makes a case for: ‘we had better start taking a much closer look at the impact we are having on our environment while there is still a small possibility that we can  make a difference’ and start to turn the clock back. 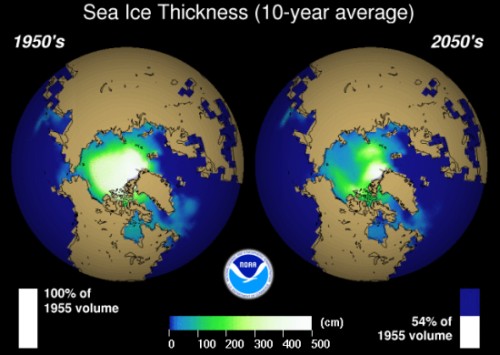 Arctic sea ice looks set to hit a record low by the end of the month, according to satellite data.

Scientists at the US National Snow and Ice Data Center (NSIDC) said data showed that the sea ice extent was tracking below the previous record low, set in 2007.

The ice is expected to continue melting until mid- to late September.”A new daily record… would be likely by the end of August,” the centre’s lead scientist, Ted Scambos, told Reuters.

“Chances are it will cross the previous record while we are still in ice retreat.”

Sea ice extent refers to a measurement of the area of Arctic Ocean that contains at least some sea ice. Areas with less than 15% are considered by scientists to mark the ice edge.

In its latest summary, the centre said the average rate of ice loss since late June had been “rapid”, with just over 100,000 sq km melting each day.

However, it added, the rate of loss doubled for a few days earlier this month during a major storm.

Responding to the latest update, Prof Seymour Laxon, professor of climate physics at University College London, said that he was not surprised that 2012 was set to deliver a record minimum.

“We got very close to a record minimum last year,” he told BBC News.

“The fact that Cryosat showed thinner ice last winter, it is not surprising to me that it looks like we will have a record minimum this year.”

Cryosat is a radar spacecraft operated by the European Space Agency (Esa) that was launched in 2010 to monitor changes in the thickness and shape of polar ice.

Prof Laxon added that this year’s projected record minimum could result in a change in projections of when the Arctic would be sea ice-free during summer months.

“The previous [Intergovernmental Panel on Climate Change] report (published in 2007) stated that the likely date for an ice-free Arctic in the summer – and definitions for this vary a bit – was 2100,” he explained.

“The fact that we look set to get another record ice minimum in such a short space of time means that the modellers may once again need to go and look at what their projections are telling them.”

As the ice has a bright surface, it reflects about 80% of the sunlight that hits it back into space.

When the sea ice melts, it exposes more of the dark ocean surface, resulting in 90% of the sunlight being absorbed, which warms the Arctic ocean.

Below is very informative video about the increase of speed in the flow of ice from the ice-sheets in Greenland.

Since measurements of Jakobshavn Isbrae were first taken in 1850, the glacier has gradually receded, finally coming to rest at a certain point for the past 5 decades. However, from 1997 to 2006, the glacier has begun to recede again, this time almost doubling in speed.

This animation shows the flow of the Jakobshavn glacier and is narrated by Waleed Abdalati, head of the Cryospheric Sciences Branch at NASA’s Goddard Space Flight Center.

If you have any observations or comments you would like to share on the  ‘Arctic Sea Ice Thickness‘ debate; please leave them below, many thanks.