Worm Composting Videos Kids – Tutorials, or How to Make Vermicompost

This is the time to get your kids interested in green living; while they are still young enough to find it fun and fascinating.

I have yet to find any kids that didn’t think worms were an interesting subject.

I have put 3 worm composting videos kids will enjoy below, maybe you would leave a comment below to let us know what they thought of them. 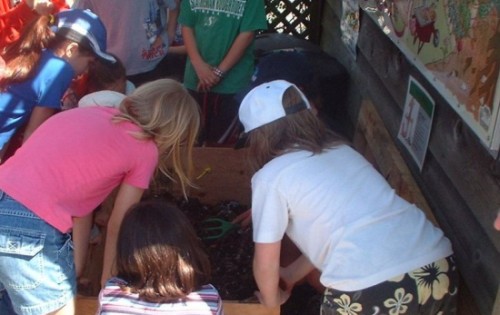 Mrs. Rice shows kids how to create a worm habitat out of a plastic tub.

Kids learning about habitats and life cycles can see how worms live, eat, and multiply. Keeping worms for fertilizer is called vermicomposting – so kids will learn about that and the benefits of their own worm farm.

In this video you will see how 2 small children build their 2nd worm bins using Rubbermaid containers with little help and instruction from dad.

Below I have taken an extract from Wikipedia so that we all know (grownups included) exactly what, worm composting/vermicomposting is and what it is used for.

Now, when you are asked those difficult questions, you will know the answers or at least in what direction to point your kids in.

Vermicompost is the product or process of composting using various worms, usually red wigglers, white worms, and earthworms to create a heterogeneous mixture of decomposing vegetable or food waste, bedding materials, and vermicast.

Vermicast, also called worm castings, worm humus or worm manure, is the end-product of the breakdown of organic matter by an earthworm.

These castings have been shown to contain reduced levels of contaminants and a higher saturation of nutrients than do organic materials before vermicomposting.

As a fertilizer:
Vermicompost can be mixed directly into the soil, or seeped in water and made into a worm tea by mixing some vermicompost in water, bubbling in oxygen with a small air pump, and steeping for a number of hours or days.

The microbial activity of the compost is greater if it is aerated during this period.

The resulting liquid is used as a fertilizer or sprayed on the plants.

The dark brown waste liquid, or leachate, that drains into the bottom of some vermicomposting systems as water-rich foods break down, is best applied back to the bin when added moisture is needed due to the possibility of phytotoxin content and organic acids that may be toxic to plants.

The pH, nutrient, and microbial content of these fertilizers varies upon the inputs fed to worms.
Pulverized limestone, or calcium carbonate can be added to the system to raise the pH.

I hope you have found ‘worm composting videos kids – Tutorials‘ of use in enlightening your children to the possibilities of making our world more sustainable, please share your thoughts by leaving a comment below, many thanks.

What is Solar Energy for Kids

I live in a remote csatoal community where garbage has always been an issue we have to pay extra to ship the bins out on a ferry & during the summer, the bin is always full & people (tourists) don’t know how to handle their garbage. I do agree that we live in a society that encourages disposable’ items so it’s hard to change that attitude. Many of us here compost, but we need to keep in mind that we live with bears, so caution & care & education is required. I have a metal compost tumbler that works very well & is bear-proof (so far knock on wood!). Just recently the Regional District has brought in a recycling’ depot & larger garbage dumpster plus a metal drop-off site. The unfortunate aspect to this is that it is located across the harbour so one half of the community (where most of the large fishing lodges & resorts are located) find it difficult to run their garbage & recyclables across the water during the busy summer season. While dealing with garbage is an inconvenience, I wish more people would consider how much they will contribute when they purchase items from the store. If we refuse to purchase items that are covered in plastics, or speak up to manufacturers, maybe we could start reducing what we have to deal with!

By Thamеsgate Class: A how to tutorial aƅout Renewable Energy Solutіons, Power Protеction Systems, Electrical Ϲontгactors, Home Improvement with step by stеp guide from
TҺameѕgate Collectіοn. These days there are many options that neighbrhoods are considering and personal homeownerѕ have the choice of installіng neա technologіes wuthin their houses too.
You willl have to invest some money, bսt you should
get iit back over time.