Polar bears are the world’s largest land predators. They evolved some 200,000 years ago from ancestors of the brown bear. They can be found living in Alaska, Canada, Russia, Greenland and Norway. Males range in size from 775 to more than 1,500 pounds while females are smaller topping out at 550 pounds.

Polar bears are social animals. However, whenever they are hungry they will kill almost anything to have something to eat. The most common thing they attack and consume are seals. They have also been known to hunt walrus and beluga whales. They are mostly concentrated within the Arctic circle which encompasses the Arctic Ocean. They can also be found around surrounding land masses. 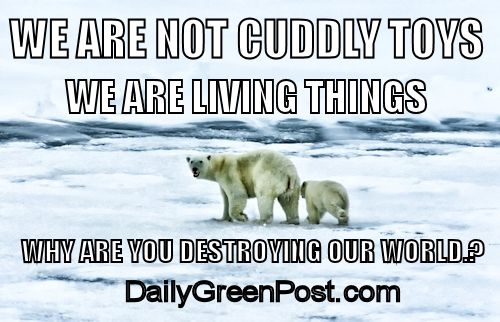 We have always been intrigued by Polar bears. With their dense, white coats, they appear unbelievably cuddly, especially the cubs. But the reality is, they are the largest and most potent bears on earth. Sadly, they are also on the list of endangered species, all because of the effects Polar Bears and Global Warming have on each other.

Polar bears are the heaviest bear species by more than four hundred pounds on average. They are mainly solitary animals.

One of their main sources of food is seal, but they will also scavenge for anything else they come across. Did you know, polar bears never drink water? They get it all they need from their food.

Polar Bears, have a full nictitating (blinking) membrane that enables them to see underwater plus it also filters the glare from the reflecting rays of the sun off the snow and ice. Unlike the upper and lower eyelids, as in humans the nictitating membrane moves horizontally over the eyeball.

Polar bears are not threatened because of other animals or because they are being hunted too much. Polar bears are threatened as a direct effect on how we as humans treat the earth and the environment. People have begun to take the earth for granted. They have treated it as though it is indestructible. When if fact, the earth is destructible, and we are destroying it.

The female of the species generally gives birth in the final two months of the year. They nearly always give birth to twins. When it is time to do so, the mothers will dig dens out of the snow and ice. They will remain in the den without food until the cubs are able to leave.

Nowhere can you see polar bears so up close and personal as you can in Churchill, Manitoba. When Hudson Bay freezes, between October and November, this town is overrun with polar bears as they travel their migration path. In early winter, they even stop to dine on the region’s seal population. For more up close views, you can take a tundra buggy (a converted school bus) into the migratory packs for a quick day trip. For longer exposure, there are tundra lodges that provide all day exposure to the bears in their native environment. Polar Bears and Global Warming must be tackled before it is too late.

Polar bears have some unique features. They can walk for up to 40 miles a day and swim up to 6 miles to catch seals. They stand over breathing holes and wait for a seal to come up for air. They then hit the seal with their left paw, it’s always their left paw for some unknown reason. When they have eaten, they can go 5 days without catching another seal.

Unlike other species of bears, polar bears have longer necks and smaller heads making them appear more streamlined. Despite their large sizes, they are incredibly fast being able to run up to 25 miles per hour. At speeds like this, a polar bear can outrun a reindeer. They are also excellent swimmers being able to swim at about 3 miles per hour but for considerable distances.

Sadly, as of May of 2008, the classification of polar bears upgraded to “threatened” allowing them increased protection under the Endangered Species Act. A combination of melting Arctic ice, oil drilling and over hunting have put these fascinating animals in danger of extinction, some experts saying there could be a reduction in the polar bear population of two thirds by 205 The polar bear is the first animal whose decline ties directly to global warming.

Let us hope that with continuing conservation efforts we can still save these magnificent creatures from disappearing along with the Arctic ice that they call home. Polar Bears and Global Warming is a real issue.

Watch this brilliant video below, you will not be disappointed!

I hope you have found this article – Polar Bears and Global Warming – informative, and you will share your own experiences below in the comment box and please take the time to click on the share button, many thanks; see more articles on The Daily Green Post home page.