I have to admit that Gilberts Potoroo, possibly the worlds’ rarest marsupial was completely unknown to me up until 24 hours ago…

… When I read an article in the – ‘The Conversation’ – on the animal.

It makes for a fascinating story…!!! 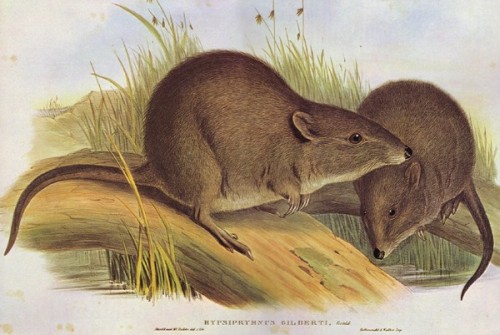 Gilberts Potoroo (Potorous gilbertii) is one of four species of Potoroo.

It has dense grey-brown fur, paler on the underside, with furry jowls, large eyes and an almost hairless tail. It is the smallest extant member of the genus, weighing in at around a kilogram. With a diet of over 90% underground fungi (truffles), it is one of the most fungi-dependent mammals in the world.

Like other potoroos, these animals are mainly solitary, with little overlap in home range between individuals of the same sex, although a male and a female may be found nesting together under the dense sedges in their heathland habitat, sometimes with a young-at-heel. Gilbert’s Potoroos may live ten years and reach sexual maturity at around one year of age. A female potoroo rears one young at a time, but up to three a year, so she could produce well over 20 progeny in her lifetime. 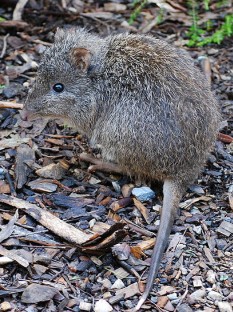 Discovered near Albany in 1840 by John Gilbert, the renowned collector for British taxonomist John Gould, Gilbert’s Potoroos were never widespread.

Sub-fossil remains in caves near the southwest corner show, at most, a narrow zone along the moist south coast where the marsupials lived.

Rain in most months of the year supports year-round truffles in the soil.

The species was so rare by the early 1900s that it was thought to be extinct – appearing to meet the same fate as its desert-dwelling relative, the Broad-faced Potoroo (P. platyops).

Remarkably it was rediscovered on the Mount Gardner headland at Two Peoples Bay Nature Reserve in 1994.

However extensive surveys in likely sites along the south coast failed to find any more colonies.

The tiny surviving population is now 30-40 animals strong and has been the focus of intensive recovery efforts.

As these potoroos prefer to live in dense heaths, the greatest threat to the Two Peoples Bay population and any recovery colonies is catastrophic wildfire.

Potoroos rarely venture into open habitat, but those leaving cover risk predation by foxes and feral cats as well as native predators.Strategy

Gilbert’s Potoroo could be lost in a single wildfire. The recovery strategy focuses on managing this risk by increasing numbers and establishing more populations.

So the focus of the recovery plan, which continues to protect the existing wild colony (through fox baiting and fire exclusion), shifted to establishing new colonies.

Despite more removals back to the new mainland enclosure, by 2012, the Bald Island population surpassed 60 and there were over 20 within the new enclosure.

While Gilbert’s Potoroo remains arguably the worlds’ rarest marsupial, its survival and recovery so far is due to the remarkable haven provided by Two Peoples Bay, where it continues to breed naturally. Ongoing allocation of funding, particularly by the Western Australian State Government, has allowed long-term recovery goals to be realized.

For the full article go to… http://theconversation.edu.au/australian-endangered-species-gilberts-potoroo-11640

I hope you have found this article – Gilberts Potoroo– informative, and you will share your own experiences below in the comment box and please take the time to click on the share button, many thanks; see more articles on The Daily Green Post home page.