I bet your children would love an’ Olinguito’ for Christmas, a Cross between a House Cat and a Teddy Bear’, I expect with this discovery of a new species of animal this will become the next must-have cuddly toy. 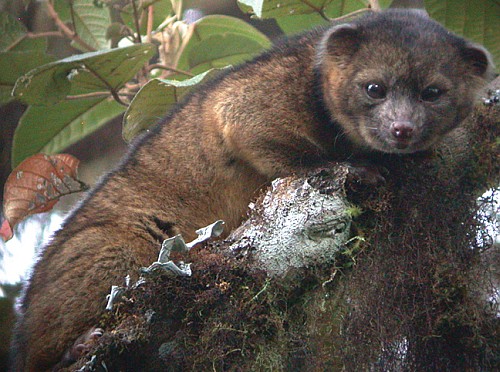 Discovery of a New Species – Olinguito
By Mark Gurney [CC-BY-3.0], via Wikimedia Commons

[box]Make sure you like > Daily Green Post  on Facebook < to be updated every time we find new tips on helping the environment, plus exciting and innovative new ways to help you and your family.[/box]

Below is an excerpt from the BBC, a link to the full article is at the bottom of the post.

Scientists in the US have discovered a new animal living in the cloud forests of Colombia and Ecuador.

It has been named Olinguito and is the first new species of carnivore to be identified in the Western hemisphere in 35 years.

It has taken more than a decade to identify the mammal, a discovery that scientists say is incredibly rare in the 21st Century.

The credit goes to a team from the Smithsonian Institution.

The trail began when zoologist Kristofer Helgen uncovered some bones and animal skins in storage at a museum in Chicago.

“It stopped me in my tracks,” he told BBC News. “The skins were a rich red color and when I looked at the skulls I didn’t recognize the anatomy. It was different to any similar animal I’d seen, and right away I thought it could be a species new to science.”

Dr Helgen is curator of mammals at the National Museum of Natural History in Washington DC, which houses the largest mammal collection in the world.

The 35cm-long (14in) Olinguito is the latest addition to the animal family that includes racoons. By comparing DNA samples with the other five known species, Dr Helgen was able to confirm his discovery.

But even after identifying the Olinguito, a crucial question remained: could they be living in the wild?

The olinguito is now known to inhabit a number of protected areas from Central Colombia to western Ecuador. Although it is a carnivore, it eats mainly fruit, comes out at night and lives by itself, producing just one baby at a time.

[box]Make sure you like > Daily Green Post  on Facebook < to be updated every time we find new tips on helping the environment, plus exciting and innovative new ways to help you and your family.[/box]

I hope you have found this article – Discovery of a New Species – informative, and you will share your own experiences below in the comment box and please take the time to click on the share button, many thanks; see more articles on Daily Green Post home page.