Space Debris – The Swiss To The Rescue

It’s absolutely amazing, just when we think we have turned a few corners in striving to save the planet from the ravages of waste and destruction; we now discover that – ‘Space: the final frontier’ – is already in the throes of being littered with all manner of waste products from all the satellites that have been discarded and all sorts of man-made floating debris.

The following graphics are computer generated images of objects in Earth orbit that are currently being tracked. Approximately 95% of the objects in this illustration are orbital debris, i.e., not functional satellites. The dots represent the current location of each item. The orbital debris dots are scaled according to the image size of the graphic to optimize their visibility and are not scaled to Earth. 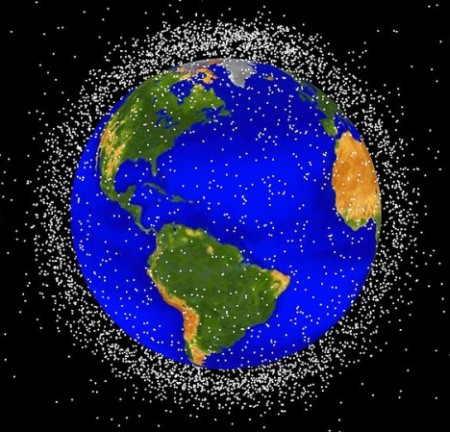 Have a look at this video by EPFL, it makes for some fascinating viewing.

EPFL is one of two Federal Institutes of Technology in Switzerland. Located along the shore of Lake Geneva, the university has more than 9,000 students in seven academic schools including Life Science, Architecture, and Computer Sciences.

I have put an overview of an interesting article on the subject Space Debris below.

The proliferation of debris orbiting the Earth – primarily jettisoned rocket and satellite components – is an increasingly pressing problem for spacecraft, and it can generate huge costs. To combat this scourge, the Swiss Space Center at EPFL is announcing today the launch of CleanSpaceOne, a project to develop and build the first installment of a family of satellites specially designed to clean up space debris.

The Earth’s orbit is full of all kinds of floating debris; a growing crowd of abandoned satellites, spent rocket stages, bits of broken spacecraft, and fragments from collisions is rocketing around the planet at breathtaking speeds.

NASA keeps close tabs on at least 16,000 objects that are larger than 10 cm in diameter. When an operational spacecraft such as a satellite collides with one of these bits of space junk, serious, costly damage can occur. Often the satellite is completely destroyed. And the collision itself then generates thousands more fragments, further exacerbating the problem.

The project developers have chosen a symbolic target for the initial CleanSpaceOne launch: either Switzerland’s first orbiting object, the Swisscube picosatellite which was put in orbit in 2009, or its cousin TIsat, launched in July 2010. The cleanup satellite has three major challenges to overcome, each of which will necessitate the development of new technology that could, in turn, be used down the road in other applications.

After its launch, the cleanup satellite will have to adjust its trajectory in order to match its target’s orbital plane. To do this, it could use a new kind of ultra‐compact motor designed for space applications that is being developed in EPFL laboratories. When it gets within range of its target, which will be traveling at 28,000 km/h at an altitude of 600‐700 km, CleanSpaceOne will grab and stabilize it – a mission that’s extremely dicey at these high speeds, particularly if the target is rotating. To accomplish the task, scientists are planning to develop a gripping mechanism inspired from a plant or animal example. Finally, once it’s coupled with the satellite, CleanSpaceOne will “disorbit” the unwanted satellite by heading back into the Earth’s atmosphere, where the two satellites will burn upon re‐entry.

The design and construction of CleanSpaceOne, as well as its maiden space voyage, will cost about 10 million Swiss francs. If the funding can be obtained rapidly, this first orbital rendez‐vous could take place within three years.

Last year the Swiss Re insurance company published a study showing that every year, there is a nearly one in 10,000 chance that a 10 m2 satellite traveling in a sun‐synchronous (600‐1,000 km) orbit will collide with a piece of space debris larger than 1 cm.

I hope you have found this article – ‘Space Debris’ – informative, and you will share your own thoughts below in the comment box and please take the time to click on the share button, many thanks; see more articles on… The Daily Green Post home page.