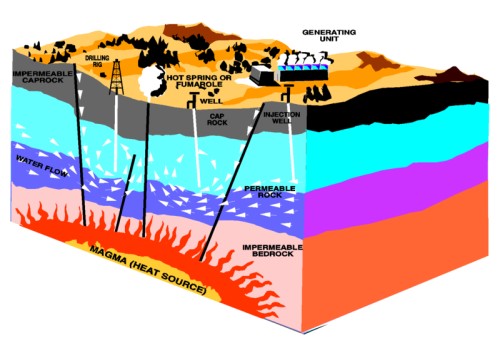 For far too long, we have been over reliant on fossil fuels; inevitably, there  will be dire consequences.

Our constant use of fossil fuels is exhausting our resources and inexorably dooming our planet Earth.

I am told there are presently in excess fifty thousand coal plants around the world and that quantity is expected to carry on rising.

But, if we start to move our attention towards Renewable Energy Sources, our environment would begin to start reaping benefits, directly.

Getting people to change their ways and views is the toughest part, especially as fossil fuels are used to produce most of the heat and power for our dwellings, our vehicles, our transport and electricity stations.

What are the advantages of renewable energy sources?

A schematic of a microbial electrolysis cell (MFC)

The primary advantage is, we already have them and we will always have them: as far into the future as we can see, plus they do not produce harmful materials, which may have a damaging effect on our environment.

Renewable energy sources like solar power, wind turbines, wave, hydro-power, geothermal and such-like are the areas where we need lots of research to take us forward into the 21st century.

Obviously where we are geographically makes a huge difference on what’s available to us.

But it shouldn’t stop us trying to find ways to make a difference. 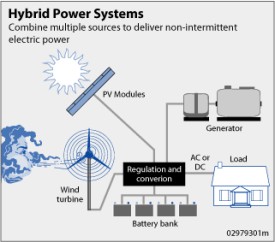 We have the technology to do something about it, but  what we really need even more, is our governments to start investing seriously in our future because despite the number of conferences on global warming and climate change, very little ever changes.

We’ll know when we have turned the corner, when we see newspapers with headlines such as:

If you have any constructive comments to make please join in the debate.

Below is an interesting article from… Wikimedia on ‘Measuring Solar Insolation’

These false-color images show the average solar insolation, or rate of incoming sunlight at the Earth’s surface, over the entire globe for the months of January and April. The colors correspond to values (kilowatt hours per square meter per day) measured every day by a variety of Earth-observing satellites and integrated by the International Satellite Cloud Climatology Project (ISCCP). NASA’s Surface Meteorology and Solar Energy (SSE) Project compiled these data–collected from July 1983 to June 1993–into a 10-year average for that period. 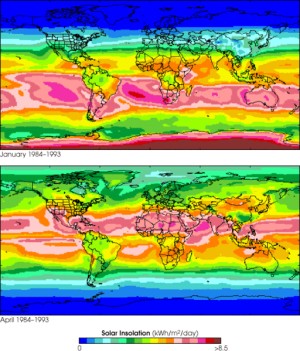 Such images are particularly useful to engineers and entrepreneurs who develop new technologies for converting solar energy into electricity. To attain best results, most devices for harvesting sunlight require an insolation of greater than 3 to 4 kilowatt hours per square meter per day. Luckily, insolation is quite high year round near the equator, where roughly a billion people around the world must spend more money on fuel for cooking than they have to spend on food itself. Natural renewable energy resources is a particularly relevant topic in the United States today as there are rolling blackouts across the state of California while other U.S. city and state governments grapple with energy deregulation issues.
To facilitate development of new technologies for harvesting natural renewable energy sources, the SSE Project at NASA Langley Research Center has made available a wealth of global-scale data on a variety of meteorological topics, including insolation, cloud cover, air temperature, and wind speed and direction. These data are freely available at the SSE Project Web Page.

Thanks for visiting the site… the debate on Renewable Energy Sources is set to run and run, share your views below, and please click the share button.

I agree with this article.